Marshall Square Park is West Chester's first public square, modeled after Washington Square Park in Philadelphia. It was originally acquired by the Borough of West Chester in 1841, and is an impressive part of history of our town.

Below is a timeline of events from the very beginning up until present day: 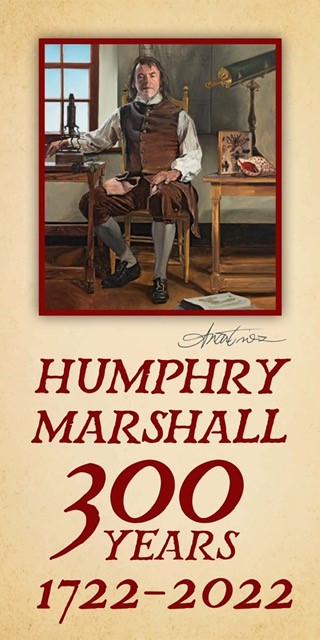 Marshall was born in 1722 and never went to school after the age of twelve; yet (appropriately for a cousin of William Bartram, America’s most celebrated explorer/botanist) he published in 1785 “Arbustum Americanum, the American Grove,” the first botanical essay in the Western hemisphere!

Marshallton, four miles to the west of West Chester, also bears his name, for he acquired the land on which that village stands.

Humphry Marshall turns 300 in 2022! Click here for an article in Main Line Today which gives a great history of his life and legacy.

The park land, which includes the highest point in the borough, was originally acquired in 1841 as the site for the borough reservoir.

The park was dedicated in 1848. It was named after Humphry Marshall (1722-1801), "one of the earliest and most distinguished horticulturists and botanists of our country" who "established the second botanic garden in this republic and also prepared and published the first treatise on the forest trees and shrubs of the United States."

Botanizing was a favorite avocation of West Chester’s professional men, some of whom attained international recognition. Dr. William Darlington, Joshua Hoopes, and David Townsend were such botanizers, and they succeeded in having this square developed as a small arboretum; in 1878 it became a public park, based on a plan by Joshua Hoopes, a nurseryman.

Although most of its large and exotic trees are gone, a few remain, and it is worth walking through the park to find them. The southwest corner originally held a basin for West Chester’s water supply; now it features the Soldiers’ Monument honoring the 97th Regiment of the Civil War. The monument was erected in 1887 by veterans of the 97th Regiment of the Pennsylvania Volunteer Infantry in honor of their fallen comrades.

Theodore P. Apple, W.T. Shepherd and W. S. Bishop were in Philadelphia and purchased a beautiful fountain for the public park. The fountain cost about $170. The fountain is a fine metallic one about twelve feet in height and consists of a series of five round scalloped basins, one above the other, the basins growing smaller as the top is neared. On the top is a metal basket in which lies a ball. This ball will be kept in motion by the action of the water.

In 1892-1894, brick gutters, approximately 3 feet wide, were added as a drainage system. These "swales" ran along the gravel paths to protect them from storm erosion. The first to be laid was along the northeast entrance towards the fountain and at the southeast entrance, running into the street. The gutters of the southern portion were added in 1893, and the northwest were completed in 1894.

The fountain was a "hub of community activity" before it was removed in the early 1950s. Sections were saved by private owners who kept them on an East Bradford Farm.

Rose Scott, as her Girl Scout Gold Award Project, uncovered the brick drainage swales which had been overgrown for decades. The total extent of the swale system is not known, but the parts both she and Eagle Scout Tim Beaugard restored totaled 3,000 feet.

Friends of Marshall Square Park surrounded the Park with hundreds of luminaria (PHOTOGRAPHS) in conjunction with the Borough’s Old Fashioned Christmas.

The fountain is restored to working order and stands once again at the corner of East Marshall and North Franklin Streets.

The fountain is named the "Jack R. Loew Memorial Fountain" in honor of the well-known West Chester developer. His widow, Patricia Burton Loew, the chief contributor to the the restoration of the fountain, was present for the ceremony.