At the northwest corner of Marshall Square Park in West Chester, Adelaide Fieldhouse sets up her lemonade stand.“I’ll bring the signs; you take the cups,” she orders her father, who is unloading the trunk of the 2011 Honda CR-V parked on the side of the road.

“I’ll bring the signs; you take the cups,” she orders her father, who is unloading the trunk of the 2011 Honda CR-V parked on the side of the road.

Her younger sister, Briar, who told anyone who asked Sunday that she “will be 4 in 24 days,” ran to the playground and began pushing a swing no one was in. Adelaide examined the signs reading “Fresh Lemonade” and “All donations will go toward the toddler playground in the park!” They looked good. But then she realized: “We need tape!”

A couple minutes later they were all set, ready to partake in the great American summer tradition that blends capitalism and cuteness. The table and white chairs were unfolded, the sign hung with duct tape from a gray tablecloth, the paper cups were in two towers, and prominently in the middle was the lemonade.

Before Labor Day marked the traditional end of summer, the Fieldhouse family had their last lemonade stand of the season. Adelaide wanted to squeeze one more in before life, even for a 5-year-old, becomes too busy. She started kindergarten last week and will soon have basketball practices and games and gymnastics to do before her 7:15 p.m. bedtime. 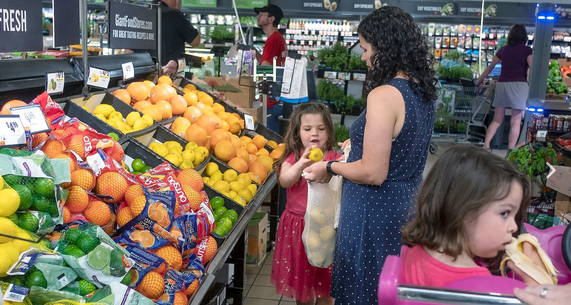 Chantale Fieldhouse and her daughter, Adelaide, 5, pick lemons from a bin at their local Giant supermarket this morning as Briar, 3, waits in the shopping cart.

At first, Adelaide wanted to have a lemonade stand to earn money for stuffed animals, but her parents, Chantale and David, said no, so she settled on raising money for her local playground to include a toddler section. The family hoped to beat last month’s earnings of almost $40.

“Do you want some lemonade?” Adelaide asked the first woman in view. The mother was pushing her 2-year-old daughter in a stroller and stopped for a sip. She didn’t have any cash on her but promised to come back with some later.

Neighborhood friends arrived, and Adelaide squealed in excitement. Many saw the notice on the “Friends of Marshall Square Park” Facebook group asking all to come to the park about 11:30 a.m. for “Adelaide’s Lemonade Stand.”

For some time, Adelaide got to work. “Excuse me!” she said to people walking by on the other side of the street. “Do you want some lemonade?”

She learned a lot of lessons selling lemonade, such as why the man in the Ford stopped to donate money but couldn’t drink any. “I’m diabetic,” he told her. She also learned sales tricks. “It’s fresh,” she would tell people as a plea if they said no or that they’d come back later.

After a busy 20 minutes with a steady stream of customers, the girls couldn’t help but be tempted by the playground behind them.

Soon, Briar was climbing a ladder that looked like a tree trunk to the top of the play set, and Adelaide ran across the shaky bridge toward the slide. Eventually, together, they ran back to the lemonade stand, where their parents were keeping watch.

“When you’re not here, we can’t get customers,” their father explained to them.

“They want to buy from kiddos not adults,” her mother said.

The girls became frustrated with the waiting.

“This is what actually having a business is sometimes,” their father said, before diving into examples. “Restaurants, they’re open all day, but then they get really busy when everyone is hungry.”

The stand would make $139.50 over an hour and a half Sunday, more than tripling profits from last time, even though the girls weren’t at the table for every moment, a visitor slipped a bill into the mason jars. As excited as Adelaide was for this lemonade stand, it’s hard to sit still on Labor Day weekend when you’re only 5, and there’s a gaggle of kids behind you.

By the end, the temptation was too much and Adelaide went running, spending the last bit of her summertime business on the playground.